There are times when I come walking through a room and notice a new plastic figurine (mainly because I step on it or kick it), and I know instantly that it is the toy from a McDonald’s Happy Meal.  Like a lot of other people I know, I probably eat less McDonald’s now than ever before, but I can still spot a Happy Meal toy, and the most recent one has me puzzled. 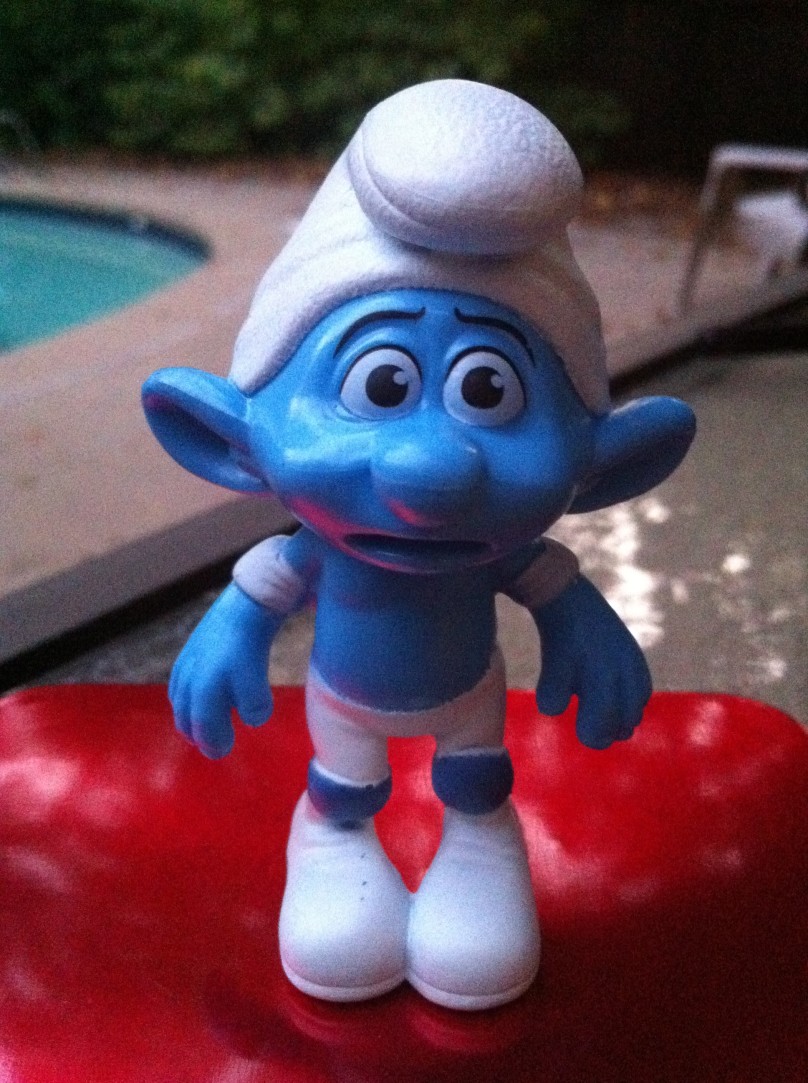 No, I’m not making that up.  It’s written on his foot, in a rather elegant (for a Smurf) script.

Panicky is one of 105 known Smurfs.  It is rumored that there are others, but they are no longer in SAG and have been excised from both Wikipedia and IMDB.  In other words, there are only 105 Smurfs.

The thing that has me so puzzled is this: how did Panicky Smurf land a role as one of the 16 Collectible Smurfs from McDonalds, a plastic ambassador for the new Smurf movie?

Let’s just start with the foundation of this situation – the Happy Meal – that evergreen promotional tool that always needs a new gimmick, a new way to charge a toll on those who would ride the pop culture super-highway.  The Smurf movie is a big hit; kids love it.  They beg mom and dad to take them for a Happy Meal so they can get their own Smurf.  And whamo, the Happy Meal delivers again.

(Let me just step aside here for a moment and throw out a disclaimer – Don’t take this as a criticism of McDonalds and their ilk.  If anyone deserves blame, it is we parents who foolishly accept the illogical premise that the only way to get Junior to shut up about the Smurfs is to buy him a Happy Meal.  I bet I could order one from Zappos, and it’d be here before I finish this sentence, and it would come with a Starbucks Gift Card that would exceed the cost of the Smurf itself, and I could have chosen from all 105 Smurfs, customized my Smurf’s get up, and posted it all to Facebook in less than two minutes.  We live in the future, yet we accept a stupid economic premise without question.  Anyway, we also deserve blame for not standing up to kids who use pestering as means of acquiring what they want.  We’re all guilty at times, but I believe a default position of NO for acquiring new toys is good for a person’s character.  It’s also the only way to have any sort of feng shui in your joint.)

Back to the curiosity du jour – evil or not, the Happy Meal has to operate within an ever more strict set of guidelines.  Most of them flow from fear of litigation.  The legal teams for big companies have a lot to say about what gets printed on boxes, published online and in literature, and made out of plastic and painted blue.  Don’t break a law, overstate a point, or offend anyone.  I’m guessing they have a checklist they use to review new stuff – it has to be organic, cage-free, free range, and without lead, nitrites, and BPA at the very least.  And then you’d assume that the political correctness whiners would weigh in.  So, for the life of me, how did PANICKY SMURF make it through?

I mean, it’s a Happy Meal!  With all of their environmentally-conscious and health conscious PR, how could this slip through?  What’s happy about a Smurf who would normally be whiling away the years in bliss but for his panicky disposition?  Not that Panicky doesn’t deserve our sympathy and encouragement…he does.  But are there really not 16 other Smurfs who would perhaps more appropriately reflect the values and feelings normally associated with the Happy Meal?

If you’ve got a few minutes to kill, go read all of the Smurfs and their descriptions off Wikipedia.  It’s awesome.

You’ll immediately notice famous and beloved Smurfs such as (descriptions directly from Wikipedia):

Now these are some upbeat Smurfs.  How could Panicky – bless his little blue heart – get picked over these standouts?  The media would eat each of these up in turn.  Can’t you just see Natural Smurf in a Levis ad?  And Vanity Smurf hanging with Paris Hilton on TMZ.  And Finance Smurf carousing with the Donald.  This all makes sense.  This all fits with how shit works these days.  And there are plenty of other Smurfs who are ready to go.  Blue bloods, one after the other, literally.  But Panicky?  It doesn’t add up…unless…

McDonalds is having an attack of conscience.

Maybe it’s just a sign of the times that even the Happy Meal needs to take it down a notch from time to time.  Maybe it’s time to put crassness aside and look around.  Take a good hard look and recognize that there are Panicky Smurfs everywhere, and they deserve to be in a Happy Meal just as much as Pretentious Smurf (who lives on the Upper East Side) and King Smurf (who lives on an island in the Bahamas).  Not everyone can have the carefree life of Lazy Smurf (He spends almost all his time sleeping, either in his bed, a hammock, on the grass, or anywhere, anytime, day or night.)

I guess that’s it.  This is just a subtle way for McDonalds to let us know they care about all of us.  Well, I for one would just like to stand up and say “Bravo! McD…”

But wait…if this is for real, seems like they’d have chosen Dabbler Smurf:

Or you can pay more at Amazon.